Meet Rafael. 17 years old. Freshly graduated from high school in São Paulo, Brazil. Last night he played this amazing gig at Pllek in Amsterdam. On the flute. Yes, I know now that the flute rocks, as I danced my ass off on his melodies. Rafael just came to the Netherlands for a prep course at the Amsterdam conservatory. Yep, this young man has talent. Let me share his amazing story with you.

Back home in Brazil Rafael grew up in a little town near São Paulo. His dad is a musician and producer of Brazilian music, his mom a teacher. It became clear early on that Rafael inherited his dad’s musical talents. Which brought his dad to have a full time student under his wings.

Hearing Rafael telling me his story I couldn’t feel more jealous, as my own dad thought he would get a heart attack when I applied for art school in my early twenties (note: I was the one who dicided to finish law school, why again?). Hence, my fascination for musicians, painters and actors ;-). Which basically means that the closest to living my dream right now is to follow them around like a groupy. We will just have to accept that I sneak around in the lives I never had. But hej, you get to sneak around here with me!

Back to Rafael. As it turns out, talent + a lot of practice = result. At age 9 Rafael got to perform with one of the greatest musicians of Brazil: the late Dominguinhos. His dad had to order a special piece all the way from Germany to make the flute smaller so it could fit all of Rafaels tiny fingers. Check out how this sweet 9 year old and the legend play together. And yes, his dad had to cry.

Of course it didn’t stop here. Only 4 years later Rafael recorded his first album, together with Rafael Schimidt. Did I say already at age 13? You know what I was doing at that age? Getting off my Spice Girls cloud, figuring out which crush would also have a crush on me and how to not get in trouble for… well… doing nothing at school, basically. I could also have recorded an album. But than you wouldn’t be reading this.

Next to waking up with live music, in whatever room it is that you wake up at, groupy life has even more plusses. My new besties taught me all about the ins and outs of the music business. And about Brazilian cheese puffs. They’re amazing, try them out if you can! Being a groupy as well. It’s all the fun minus the years of hard work. And you can just do it in the weekends. Thank’s after all dad ;-D 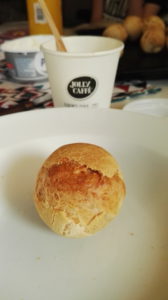 – Is he asking him for a sunday morning dance? Or to tidy up the bed?” – 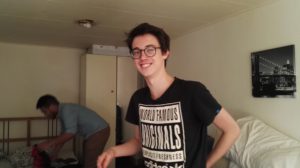 In May Rafael returns back home, where he will keep practicing and sharing his wonderful talent. I’m sure groupy life will bring me to Brazil one day. But something tells me we won’t have to travel that far to hear from him.